Generously relax in your way

Het Koetshuis is conveniently situated in the forests of Schoorl and near the famous climbing dune, and our complementary bicycles will have you at the North Sea coast in no time. Heading out in another direction you will pass through Bergen, with its lively restaurants and bars. And if shopping’s your thing, then Alkmaar is your destination. So whatever you’re looking for you will be certain to find it.

The towns of Schoorl, Groet and Camperduin trail around the edges of the Schoorlse Dunes Natural Park, a wide swathe of dunes with a surface area of 1800 hectares. This is an area of varied vegetation and dune streams with kilometres of cycling and walking paths and three high climbing dunes. From the eastern edge of the park there is a view over an area of characteristic Dutch polder landscape, and at the end of the dunes is the start of the Hondsbossche Seawall, abutted by the bird reservation De Putten. The town itself is known for its detached houses, mostly built along shallow non-navigable waterways at the beginning of the twentieth century. All three towns offer a range of shops and restaurants.
The North Sea coast and Schoorl aan Zee are easy to reach by bicycle. Parking is available at the beaches at Hargen and Camperduin; these are also served by busses. Water-sports enthusiasts can moor in the harbour at Hargen, near the sea and the dunes. There is plenty of activity here in the summertime, with events including the sail, surf and beach festival of Hargen on Sail but also children’s activities such as treasure digs.

Bergen’s location at the edge of the dunes and wilderness has always made it a popular destination for tourists. The town itself is over one thousand years old and centred around the fifteenth-century Ruïnekerk (Ruined Church). In and around the old centre are other monuments including the historical residential neighbourhood of Meerwijk, built in 1915 according to the architectural style of the Amsterdam School. For countless years Bergen was an artists’ community where space and serenity were a source of inspiration; this is mirrored in its broad leafy avenues and large houses in their sylvan settings. Art from the Bergen School can be viewed at local museums, including the Kranenburg Museum. Even today Bergen is home to many artists who exhibit their work in galleries or the artists’ centre.
Summertime events include antiques and art markets, plus the International Holland Music Sessions, a course for talented young international musicians, in August. Art is on offer in October as well with the ten-day Art Fair. Bergen’s town centre offers a range of sidewalk cafés and restaurants and plenty of boutiques for shopping enthusiasts.

Alkmaar is primarily known as the cheese town of the Netherlands. The season runs from the first Friday of April to the first Friday of September, and every Friday morning from 10 to 12 a.m. sees a traditional cheese market at which cheeses are sold by the clapping of hands. Afterwards, members of the four-hundred year old Cheese Carriers Guild turn up to carry off the cheeses on wooden sleds after weighing them at the Weigh House. The Weigh House building itself is home to the cheese museum, where you can learn everything you ever wanted to know about cheese-making.
Besides its cheese, Alkmaar is also home to over four hundred historical monuments including the Weigh House, whose oldest sections date back to the fourteenth century, the sixteenth-century City Hall, St Laurence’s Church and houses built around traditional enclosed courtyards. Together with the canals and the facades of the houses these give the city a unique feel that serves as a charming decor to a widely varied and up-to-date range of shops. In addition to the mainly small-scale boutiques in the old centre of town there is also the huge Noorder Arcade Shopping Centre, located on the Noordhollandse Canal.
As the largest town in the region, Alkmaar is the centre of local night-life. There are many varieties of restaurants, bars and cafés as well as theatres and museums. Events include a remembrance of the Siege of Alkmaar, a Culinary Plaza and a Jazz and Music Weekend. Outdoor activities are also within easy reach at the nearby Geestmerambacht recreational park and other parks and sports facilities. 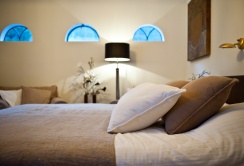 We have five rooms, each with its own style. Do you go for the Deluxe room, Japanese room, the Authentic, the Family Room or maybe the Romantic Room? 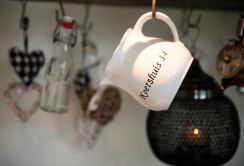 All rooms are equipped down to the last detail. Atmospheric and romantic, but with every conceivable modern comfort. Will you choose for one of our special packages? 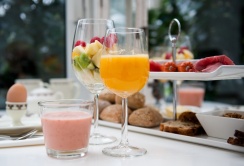 We as hosts get the breakfast products as much as possible from the immediate vicinity of The Carriage House. This we do with special attention. Different every day, but always deliciously fresh and personal.